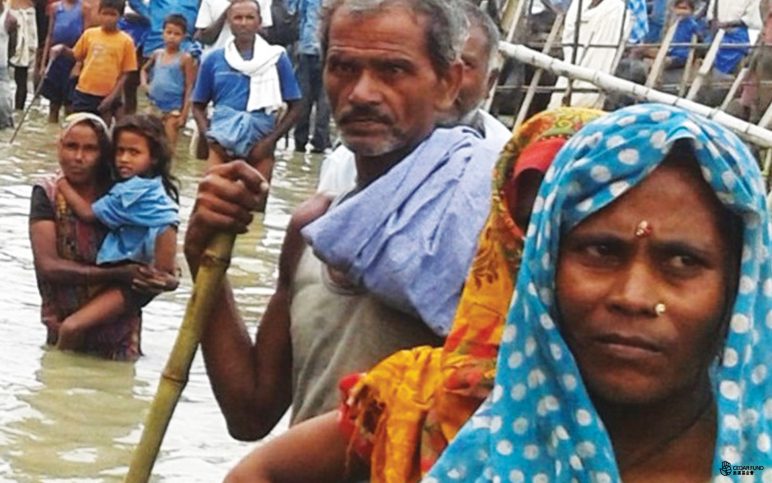 The Poor Bear the Brunt

The Evangelical Fellowship of India Commission on Relief (EFICOR) is one of CEDAR’s partners. Its Director of Training and Mobilisation, Kuki Rokhum, said during her interview with an Australian Christian organisation, “Climate change and the impact of climate injustice for most of us is just an inconvenience (in our daily lives)… but for many poor people in India, it means death.” [5]

This year, for example, the rainy season in India came late and the people had experienced the most severe heatwave and drought in decades, but before they could recover from the drought, some areas were hit by floods. Regarded as one of the “poorest states in India”, Bihar in the north-eastern part of the country recorded a temperature of over 45°C . The heat caused at least 180 deaths [6]. A few weeks later, the state was inundated. By the end of July, a total of 130 deaths were recorded and 8.8 million people were affected by the disaster. [7]

Even though India is currently experiencing accelerated economic development, one third of its population are still living below the poverty line. Climate change is pushing the poor towards the edge of death. According to statistics, over 300,000 farmers in India have taken their own lives due to financial pressure in the past 25 years. [8] Many farmers decide to leave their farms and elderly behind and move to the cities to look for work. Unfortunately, there are not enough jobs in the cities for everyone, so it is difficult for these farmers to find decent employment.

When disasters strike, CEDAR provides emergency relief to the hardest hit areas. For example, during the flooding in India as mentioned above, CEDAR assisted EFICOR in providing help to 1,500 survivors in the Madhubani district in Bihar state. However, as the Programmes Director at EFICOR, Ramesh Babu, said to CEDAR, “In most cases (climate disasters), people died, their livelihoods were impacted and large amount of livestock were killed, reflecting the fact that vulnerable residents were not prepared.” Babu said, “We must identify areas that are vulnerable to disasters, so as to make residents aware of their own threats and make prevention more effective.” In recent years, EFICOR has selected 15 destitute villages and devised tailored disaster management plans that correspond with the needs of the local communities. It is estimated that over 4,000 people will benefit from the project.

The programmes include:(1) mobilising local residents to form Disaster Management Committees; (2) delivering training to local leaders and preachers from local churches so that they can teach the others about disaster risk reduction; (3) strengthening infrastructure and supporting facilities; and (4) advocating people’s right to information to receive entitled relief aid from the government.

Three years in, this project has achieved encouraging results. Whenever there was a climate disaster, the Disaster Management Committees were proactive in providing the victims with assistance. The residents also carried out disaster drills on a regular basis and practised using boats and various equipment to aid their escape. As for mitigating the impacts of the changing climate, the residents learnt to grow disaster-resilient crops and to set up small businesses as an alternative source of income. Besides, over 80% of the residents in the local communities have received assistance from the government after EFICOR’s advocacy.

At CEDAR we are very pleased to see the results of our efforts and services. We do always remind ourselves about the essence of our mission, which is to be caring and compassionate towards the poor like Christ. The poor in developing countries often bear the brunt of climate injustice – they are not the ones who created the problem, but they suffer the most from climate change because they have the least resources to mitigate the impact. This serves as a reminder that we must stand with the poor and help them. The suffering of these individuals is a call for us to reflect on our own lifestyles – How often do we consider the impact our daily lives have on the environment? Are we being responsible to the environment in our consumptions? More importantly, have we shown our worship to God by loving and caring for His creation (including our neighbours and all other living beings)?