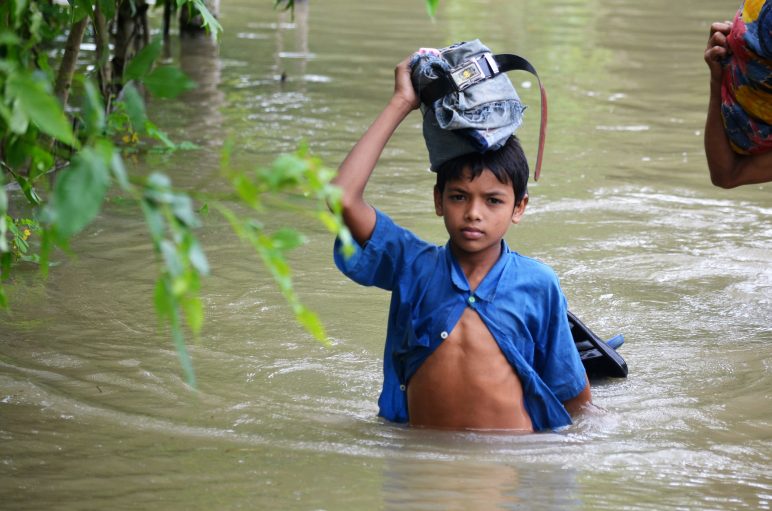 Every time there is a disaster, we feel sad and anxious for the suffering victims. While some people would pray for them, others would donate generously or organise a fundraising campaign, and some people would form a volunteer team to serve the devastated survivors through humanitarian work or counselling support. Although we try to give what we can, in the face of a natural disaster, we still feel helpless and powerless, because what could we do to stop tragedies that are not of our control?

In 2015, the massive earthquake in Nepal brought irreversible destructions: close to 9,000 casualties, 3.5 million people lost their homes, and Kathmandu Durbar Square, a UNESCO World Heritage Site, was severely damaged. The U.S. Geological Survey estimated that the overall damage of the quake was about US$10 billion (about half of the country’s GDP). So, is it true that we cannot prevent a disaster from happening?

There is a saying: “Earthquakes don’t kill people, buildings do.”

This statement points out the difference of hazard and disaster. Hazard is something natural or manmade that can cause danger, loss or casualty, such as earthquake, flooding, storm, epidemic, war, and economic crisis. A hazard itself does not form a disaster; a disaster is caused when hazard is coupled with environmental vulnerability. So, if a disaster is caused by a hazard and vulnerability of a community, then we can prevent or mitigate the impact of a disaster by identifying immediate or potential hazards within a community and factors that make the community vulnerable.

They Are Not Vulnerable

Photos and videos on news media often portray a vulnerable, suffering, depressing image of the disaster-stricken people; out of empathy, we would respond swiftly with donations and earnest prayers. Slowly, we begin to think that disaster survivors are vulnerable and they are unable to help themselves. In fact, what made them vulnerable were external factors, such as: unstable livelihood, deficiency in natural resources, building houses on unstable slopes, being marginalised by the society. If a community could not address such external vulnerabilities, it would become an inability for them to forecast or resist hazards and recover from disasters.

Disaster management includes: disaster prevention, post-disaster relief, post-disaster rehabilitation, and disaster mitigation. It is a series of interrelated interventions that aims to reduce disaster risks (hazard and vulnerability) that could cause disaster, helping community members to mitigate the impact of disasters, or even prevent a disaster from happening.

A disaster management project not only incorporates Disaster Risk Reduction (DRR) elements, but also involves building a stable livelihood. For example, a DRR project in southwestern Bangladesh focuses on assisting community members to build alternative livelihoods to cope with constant cyclones and flooding. 38-year-old Dilip was a day labourer and had a small farming land to feed his family of four. They lived in a flood-prone coastal area. Climate change has exacerbated the frequency and multiplied the impact of such disasters. The livelihoods of the locals were affected, and they had to look for jobs other than farming. Water logging has affected salinity in the soil, making it hard to grow crops. “Though I have a very small farmland, I can tell that the land’s fertility is getting reduced day by day because of salinity and frequent tidal floods. This creates a serious impact on the lives and livelihoods of marginalised population like me.” Dilip continues, “I left home and went to many northern cities in search of work, but couldn’t find a job with secure income.”

CEDAR and World Concern Bangladesh facilitate members of Dilip’s community to form a Disaster Management Committee to help plan for disaster management activities and measures, raising everyone’s awareness on DRR and organising alternative livelihood training. After attending the crab farming training provided by the Committee, Dilip was equipped. With some financial support, he started crab farming in a small pond near his home. After two months, he harvested almost triple amount of crabs. He is now able to provide for his family, “I found my way out, I no longer have to leave my family to look for jobs elsewhere.” After seeing Dilip’s example, his neighbours have expressed their interest in crab farming. Dilip thanked partner for bringing a new dimension to their livelihoods. From this example, we can see that through rising awareness on disaster management and reducing vulnerability like diversifying livelihoods for new income source besides farming, by doing so, Dilip and his community can be immune from the threats of tidal floods and provide for their families.

Soon after the earthquake in Nepal, we got in contact with our local partners and Integral Alliance members, and dedicated concerted effort on emergency relief. When the relief phase has passed, the more important work is to plan for rehabilitation and recovery work, including psychosocial support, reconstruction of schools and homes, child protection, anti-human trafficking measures, and launching disaster management and disaster mitigation work. This continued phase of work is often neglected by the public, yet it is essential in helping disaster survivors to recover and resume to their normalcy of life, and more importantly, to be equipped to prepare for similar future disasters.

Dhading district, where Hari lives, was one of the worst affected districts by the earthquake. It was reported that over 80,000 houses were totally destroyed and 30,000 houses were partly damaged. Hari used to work as a window fitter and construction worker. He was involved in constructing cowsheds and village houses, using stone and mud mortar to build. Most of the houses were destroyed during the earthquake. So, during the rehabilitation phase, our partner UMN conducted mason training to support and train local construction workers. Through the training, they learned about earthquake resistant construction technology. The curriculum was designed according to government standards. After completing the training, the trainees received construction materials and personal protective gears to further practise.

“I learned and understood various concepts, for example how to build beams, pillar and tie beams; what is the proper distance between doors, windows and corners. We also learned techniques to build stronger buildings, using local tools and materials,” Hari shares, “After the training, not only my neighbours, people from two-hour walking distance away came to ask me to help build their houses.” Hari has already constructed a school building for a secondary school. He said that even though he does not have academic qualification, the skills he learned from the training have greatly improved his career and income. Hari’s story highlights the importance and impact of post-disaster rehabilitation and recovery support in helping community members to build stronger community.

So How Could Communities Prevent a Disaster?

To execute disaster management, communities would set up Disaster Management Committees to collectively draft and implement DRR strategy and measures, reducing the vulnerabilities of the community. In Zimbabwe, our partner Evangelical Fellowship of Zimbabwe understands the significance of unity and ownership for DRR effort, so they launched the project in five communities which have participated in Church and Community Mobilisation. We encouraged community to first conduct hazard assessment, then community leaders and church leaders would lead members to review the frequency of previous natural hazards and find out factors that render them vulnerable, capacities that are lacking, and underlying causes that hinders them from better prepared for disasters. At the end, they will produce a community-owned DRR plan based on their findings, then various actions are carried out by different parties: the community itself, non-governmental organisations, and the government.

As long as a community values disaster prevention and is sensitive to vulnerabilities and hazards it faces, community members can apply relative disaster management measures to reduce the chances of disaster. Therefore, it is possible to prevent disasters from happening, even in communities in developing countries!