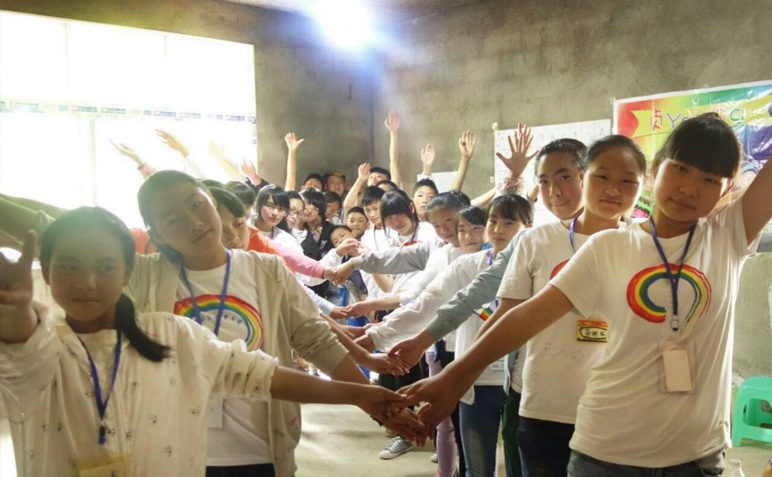 “Left-behind Children”, a term describing over 60 million children in China who stayed behind with their grandparents in rural areas while their parents are working in the cities.

While not all left-behind children suffer from poverty as their parents work far away from home, they all suffer the lack of parental care and love, and bear emotional burdens due to this long-term void.

CEDAR’s partner in Sichuan, Chengdu Fuyi Community Services Centre, began supporting youths in quake-affected communities through caring and training programmes after the 2008 earthquake in Wenchuan, Sichuan. Two more earthquakes happened in Ya’an, Sichuan and Zhaotong, Yunnan in 2013 and 2014 respectively, leading to the expansion of our partner’s service to the youths in those areas. Over 30% of the children in these areas are single-parented or left-behind children.

Xiaobo is one of the trained leaders of a youth group. He met a new member who was about his age at a youth camp. As the two quiet young men shook hands, Xiaobo was surprised by the roughness of the newcomer’s hand. He later found out during a family visit that the boy was living with his grandma in a cramped and poorly-lit clay house. Xiaobo was struck by the heaviness of the unnoticed burden put on his friend for his entire life without anyone to share with. That incident prompted Xiaobo to start caring for left-behind children. He also helped his friend to establish a support network.

The problems left-behind children experienced – poverty, loneliness, lack of social skills and self-esteem – are not caused by themselves nor their parents, but because of greater social factors, such as limitations of the household registration system, dislocation of resources, distorted social values, and lack of community support. Our partner is committed to support the youths in need by providing appropriate life skills education and mentorship with the help of local churches; they train up youths to become leaders who could give back and bless the society.

We at CEDAR would like to continue our support to the poor and neglected children through our partner, and ensure these children are entitled to the rights to survive and be protected, and rights to participate, particularly opportunity to participate in their communities’ development. These were not only stipulated under the Convention on the Rights of the Child by the United Nations, but also how we should treat each and every child as they reflect God’s image. May the lives of more children and youths who are living in loneliness and darkness be brighten.