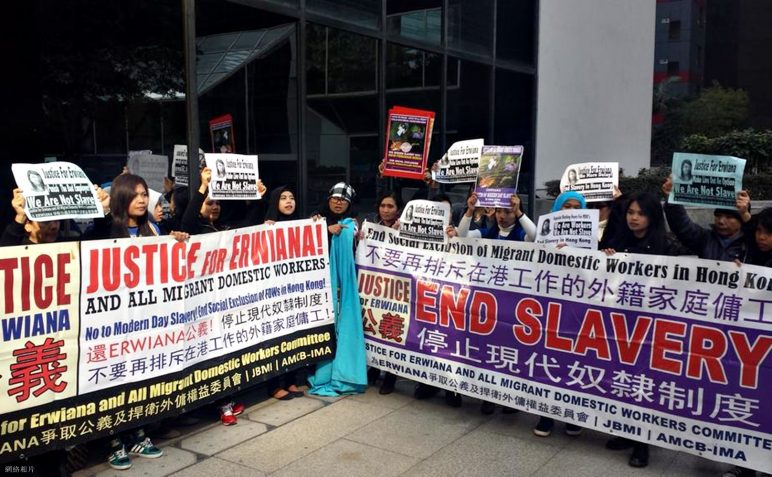 It appears that Hong Kong has nothing to do with human trafficking, and our government did not sign the Protocol to Prevent, Suppress and Punish Trafficking In Persons. In fact, Hong Kong is a port and destination of sold human commodities, and it has been placed on the Tier 2 watch list (same ranking as Afghanistan, Cuba, and Tunisia) for two consecutive years in the Trafficking in Persons Report by the U.S. Department of State. The ranking describes a country that is experiencing a significant increase in human trafficking victims, and that no tangible measures were established by the authorities. The Hong Kong government denies it has a human trafficking problem, but the Erwiana abuse case in 2014 shocked the city and revealed the hidden side of modern slavery in Hong Kong.

In May 2016, a group of high school seniors and I followed the lead of the Harmony Baptist Church to learn more about the sad realities of human trafficking and modern slavery by hearing the stories of Alison (obscured), who was sold to work in the red-light district of Wan Chai, and a migrant maid, Sophia (obscured), who was exploited and enslaved.

Every Night Was a Nightmare

Alison spent her youths in the slums of the Philippines. She started working at the age of 17, and she thought she would live happily after she met her partner and became pregnant. Sadly, her boyfriend was charged for DUI and had to go to jail, and they were in desperate need of money. At that time, Alison’s long-exited mom suddenly called her and said she could refer her to work in Hong Kong. From the moment when Alison borrowed money from her relatives and arrived at Hong Kong through an agency, she had unknowingly started on a path of no-return.

Alison recalled that every night was a nightmare to her. She was forced to be a sex worker in a bar after she arrived at Hong Kong. She tried everything to resist but the agency had numerous ways to threaten her, such as telling her to first repay her debt, or that they would break the news of her line of work to all her friends and families if she did not cooperate. Additionally, her mother kept asking for money. She was hopeless and thought about suicide. She resolved to drugs and alcohol to numb her pain.

Fortunately, Alison met a generous person who found out about her situation and decided to help repay her debt, as well as helping to send her back home where she now lives. She now has a small business to sells snacks in front of her house, and her son was able to go to school with the help of other NGOs.

Without much knowledge and protection, many people from impoverished regions, like Alison, tend to be drawn to overseas jobs with great pay and not knowing most of them are traps. Success stories like Alison’s are very scarce; most of the victims lose their freedom and dignity after being sold.

Sophia was promised a high-paid housemaid job with ample holidays in Hong Kong by an agency. It seemed to be the best thing for her as she wanted a steady job to improve her family’s living condition.

Her bubble bursts when she was informed of the HK$24,000 commission she has to pay the agency, a fortune compared to her monthly salary of HK$4,100. She could hardly send any money home after the monthly deduction.

Furthermore, she was stripped of her freedom by her employer who prevented her from talking to any guests in the house nor contacting her family and friends from home. She was not allowed to have meals that conform to her religion. The agency later persuaded her employer to switch to another maid in order to take advantage of the denunciation penalty fees, which threaten her job security.

Cases like these are only the tip of the iceberg. Chances are that we may have come across many other “Alison” and “Sophia” every day. A student shared her thoughts after the meeting, “I felt ashamed. My family hired a maid who took care of me for over 10 years. I felt that Sophia’s sharing was speaking to me. I should care more about my maid and listen to her story as a human being, even as a family member, instead of a working machine.” Let’s pray that we could learn from the experience and start taking little steps. We could be the next generous person who gives hope to many other “Alison” and “Sophia” who are still living in darkness.