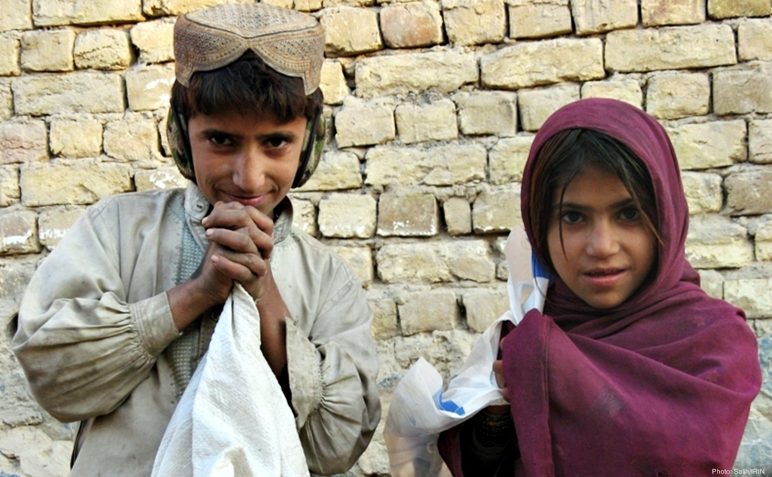 The Bible was written thousands of years ago but it has much to say about what we might see as a modern problem: human trafficking. We will look specifically at the story of Joseph in the book of Genesis, chapters 37–50. Make sure you are familiar with the story before reading this reflection or discussing it with a group.

Like so many victims of trafficking today, Joseph was sold by his own family. The fact that the Midianite caravan was ready to buy a slave to sell in Egypt (Genesis 37:26–28) tells us that the trade in people was already happening in the region at that time. Today, we are told, trafficking happens in every nation on earth, with many men and women involved in buying and selling fellow members of the human family.

It is Judah who proposes that, rather than kill Joseph, his brothers sell him. Judah argues his point by saying, ‘Let’s not lay our hands on him; after all, he is our brother’ (Genesis 37:27), showing his confused belief that the slave trade is more acceptable than murder. Yet the shock, loss of home, torture and abuse Joseph would have suffered as a result of being sold still caused him deep pain. Today, we often see people selling their own family members, just as Joseph’s brothers did. These relatives may also explain their actions in ways similar to Judah.

When the Midianites reach Egypt, Joseph is bought by a man called Potiphar and his wife. This puts Joseph in the dangerous situation of being at the mercy of his master and mistress. Young men today often look to the example of Joseph, who resists the sexual advances of Potiphar’s wife. How different might the situation have been, however, if Joseph had been a teenage girl and it had been Potiphar making the advances? That is what actually happens time and again in our society today. We know of far too many cases of young women enslaved as unpaid maids, who are sexually and physically abused by their employers.

As a slave, Joseph has no rights and no way to appeal when he is unjustly accused by Potiphar’s wife. In fact, he is the one who is accused and is jailed. This is similar to the experience of many trafficking victims, particularly sex trafficking survivors who find society blaming them for abuses done to them or in some countries, even criminalising them.

Three times in Joseph’s story the phrase, ‘But God was with him’ (Genesis 39:2, 21, 23), is repeated, reminding us that no matter how terribly we are treated by others – sold, betrayed, falsely accused, unjustly imprisoned, forgotten – God’s presence can carry us through difficult times. The remarkable thing about Joseph is that, as a trafficking survivor, he does not lose his faith, and ultimately speaks forgiveness to his brothers repeatedly (Genesis 45:5–7, 50:19–21).

This is a message of hope for survivors of modern-day trafficking. There is always a choice to trust in God and to forgive those who have wronged us. Even secular practitioners recognise the importance of forgiveness in helping survivors to move forward with their lives.

What is particularly redemptive about the Joseph story is how God uses the difficult experiences of Joseph‘s youth to position him in just the right place at the right time to make a difference. We watch, amazed, as Joseph journeys from being ‘favoured son’ to ‘betrayed slave’, and on through several promotions to arrive at being ‘Pharaoh’s right-hand man’, occupying one of the most powerful positions in the world. As Joseph himself later acknowledges, God allowed the tragedy of his trafficking to lead to ‘the saving of many lives’ (Genesis 50:20).

We really need godly men and women in positions of leadership around the world, to employ their skills – developed through personal challenge and trial – in good governance on behalf of their people. They can influence how laws are created and implemented to help vulnerable people, administering effective systems through good times and bad. After all, experts tell us that it is crises similar to the one in Egypt in Joseph’s time that make people more vulnerable to traffickers. This could be an economic crisis, a natural disaster or a war.

God used Joseph not simply despite the tragedy he experienced, but through the very effects of the tragedy itself. This can provide inspiration for modern trafficking survivors. Though they may not reach positions of such influence as Joseph did, it reminds us that their life stories are not just about the exploitation they have suffered. Rather, they can grow beyond that abuse, to bring blessing to others in many ways.

Ironically, Joseph’s own descendants and relatives end up exploited as slaves in the very nation where he himself was sold by his brothers. Their experience of bonded labour, with its violence and exploitation, has many parallels to our context today. After all, bonded labourers in the Indian subcontinent are still making bricks, and other products, without pay.

Today he continues to call us to join in his plan to set people free. Far beyond the terrible situation or statistics, our primary motivation for involvement is God’s deep concern for enslaved humanity. This is very different to Moses’ own reaction as a young man when he killed the Egyptian whom he saw oppressing a fellow Hebrew and then ran away in fear.

Intervention in an enslaved world

The answer to all of this is found only in Jesus the Messiah who, as he declares in Luke 4:18–21, fulfils the description in Isaiah 61:1–2, ‘The Spirit of the Sovereign Lord is on me because the Lord has anointed me to preach good news to the poor… sent me to bind up the broken hearted, to proclaim freedom for the captives and release from darkness for the prisoners, to proclaim the year of the Lord’s favour and the day of vengeance of our God.’ He is God’s Word incarnate, who has experienced all the pain and trauma borne by Joseph and the millions of other trafficking survivors in history. Through the sacrifice of his own body on the cross, he has made a way for the sins which lie at the root of trafficking – greed, lust, ambition – to be dealt with in the hearts of men and women who follow him.

With hearts like God’s heart, we can respond to the realities of human trafficking. We act because we share God’s vision for how he can redeem a situation like Joseph’s or transform an enslaved nation as in the days of Moses.

We can follow God’s call to rescue and rehabilitate victims of human trafficking, to work to prevent others from being sold and to bring the criminals involved to justice. Then we will surely discover many more ‘Josephs’ through whom God can work, despite their tragedies, to bring ‘the saving of many lives’.