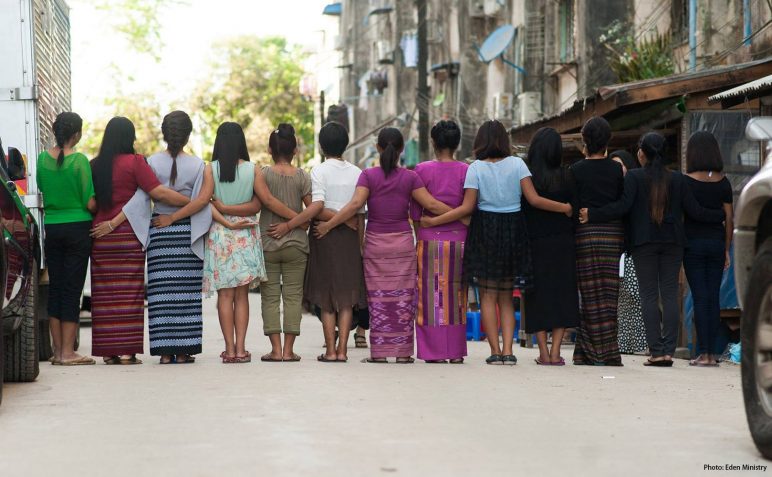 Our partner Eden Ministry is committed to help the sexually exploited to restore a dignified life.

“Now the Lord God had planted a garden in the east, in Eden; and there he put the man he had formed.” Genesis 2:8

God created the world in order, all creatures were made according to their kinds and God saw them as good. The Garden of Eden manifested God’s intention for His creations. “Eden” has the meaning of “delight or pleasure” in Hebrew. Yet, Adam and Eve sinned against God and were driven out of the Garden. Immediately after their fall, they experienced poverty and hardships, and fell into the cycle of sin. The value of people were degraded and some of them have even been put on a price and sold to others…This was not God’s intention.

In under-developed countries, young women lack education and employment opportunities. To make a living, they are often deceived by traffickers whom guaranteed a referral to a high-paying job, but they ended up being forced to sell their own bodies. These women often experience violence, face discrimination, and are vulnerable to HIV. The sex industry in Myanmar is not as vigorous as in Thailand and Cambodia, but the country is a huge exporter of sex workers, cross border trafficking is very common. Human traffickers lure victims by guaranteeing a high-paying job, and they especially target those who did not receive much education. Victims are forced to work in places such as night clubs and massage shops.

Our partner Eden Ministry in Myanmar has joined effort with local churches to fight against human trafficking activities, particularly illegal sex trades in red-light districts. You may have come across some of the necklaces and bracelets made by our partner in Hong Kong’s shops. With the 3R (Reach, Rescue, Restore) approach, Eden Ministry helps women and girls who were sexually exploited to restore their hope and dignity for their future. The outreach team looks for young women working in red-light districts, rescue victims and provide a safe place for them to live, then they received counseling and vocational training, so they can start a new life by making and selling jewelry.

Mya (obscured) was 12 when her cousin said to take her to Thailand to work in a beauty shop. Since her father passed away, her family needed to secure a source of income. She found out that she has been sold to a brothel when she arrived Thailand. She felt foolish and powerless, and she was angry with herself. She was in the brothel for three years, she lost her self and was buried in guilt. She decided to run away and was brought to Eden Ministry. At first, she drank a lot to drown her pain. She received counselling and slowly began to forgive herself and gain self-confidence. She was baptized in the name of Christ. To Mya, Eden Ministry is her Garden of Eden where she has experienced and reconciled with God.

The project has seen outstanding achievements, and our partner has established connections with key stakeholders such as other organizations and government departments who will refer cases to them. The team was also invited to conduce awareness training for police force and social workers. Yet, there are still many who are still exploited and trapped by human traffickers. May the Lord sends His servants to rescue more helpless souls, and bring them back to His Garden of Eden.

Please pray for CEDAR and Eden Ministry in Myanmar: