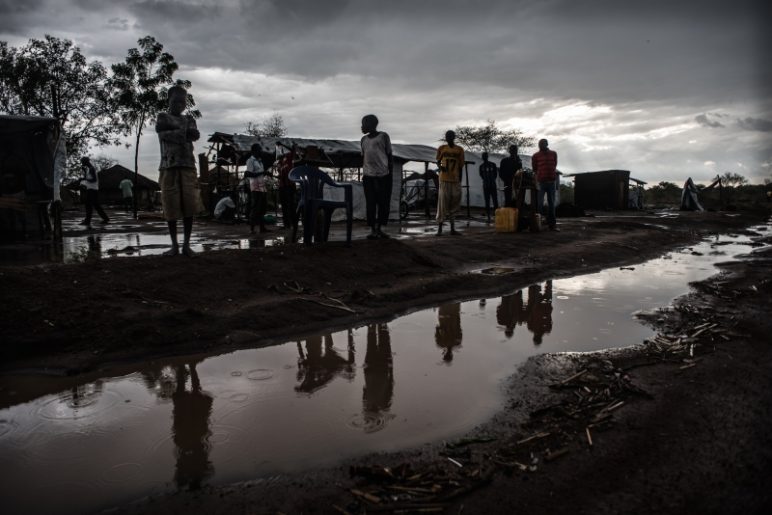 Pastor Lodiong crouches over a dark stain on a concrete walkway and says: “Someone was killed here. He was a peasant.”

In mid-April, government soldiers from a garrison to the south stormed Jalimo, a small town near Uganda, after clashing with rebels. In total, they killed four civilians and burned dozens of homes. Pastor Lodiong was outside the town at the time of the killings. He ventured to Jalimo once the gunshots stopped, and helped buried the dead bodies.

Like most of South Sudan, Kajo Keji county is also affected. In towns like Jalimo, bullet holes mark the walls of buildings, shell casings are scattered over the streets, and dozens of homes are charred. Nearly all the civilians have fled to Uganda, with few remain plagued by hunger, diseases, and fear. “I pray that God listens to His servants’ prayers and bring back peace,” says Pastor Lodiong.

Kajo Keji has a long history of conflict. A half century ago, when Sudan had not been split into two countries, rebels had already held bases in the county. When the civil war ended in 2005, Kajo Keji enjoyed a period of peace, earning a reputation for its fertile fields and well-educated populace.

A civil war between two ethnic armies, Nuer and Dinka, broke out in 2013. Although a peace deal was signed, it later triggered the return of a large-scale violence in Equatoria, including Kajo Keji.

In 2015, the conflict between the President (Dinka group) and the Vice President (Nuer group) of South Sudan caused a campaign of terror against the local population in Equatoria. South Sudan’s government deployed its most notorious militia to Equatoria to arrest, expel, or even kill anyone with suspected links to the Nuer group. Such abuses exacerbated the longstanding ethnic divide between the Equatorian population, who are mostly farmers, and the livestock-rearing Dinka members from other parts of the country.

In July 2016, the peace deal fell apart. The Vice President from Nuer group escaped to the Democratic Republic of Congo. Militia who had joined him broke off to raise rebellion in Equatoria, engulfing the region in violence. Dinka troops slaughtered Equatorian inhabitants in their attempt to subdue the rebels. At the same time, Equatorian militia killed Dinka civilians living in the region.

With ongoing conflict and little aid in Kajo Keji, over three quarters of the county’s population have gone to Uganda, settling in sprawling camps that now house nearly one million people, most of whom have entered last year. This creates the largest human exodus in Africa since Rwanda’s 1994 genocide. [IRIN]

Integral Alliance launched a disaster response in February to provide humanitarian aid to South Sudanese refugees in northern Uganda. 12 Integral members, including CEDAR, are working together to respond the crisis. Below is an update of our February to May response: “Our Father in heaven, hallowed be your name, your kingdom come, your will be done, on earth as it is in heaven…. For yours is the kingdom and the power and the glory forever. Amen.” (Matthew 6:9-13)

Our Heavenly Father, hallowed be your name. May your kingdom come to South Sudan, may your will be done there as it is in heaven. Rule over the hearts of the leaders of the Government and rebel groups. Give them a new heart with compassion to their people. Guide their soul to walk humbly with you, so that they can act justly and love mercy.

Father, please give the remained civilians in Equatoria and those who fled to Uganda and other neighbouring nations today their daily bread. Protect them from conflicts and violence, and deliver them from the evil one. Please guide their way to reconciliation, for yours is the kingdom and the power and the glory forever. Amen.