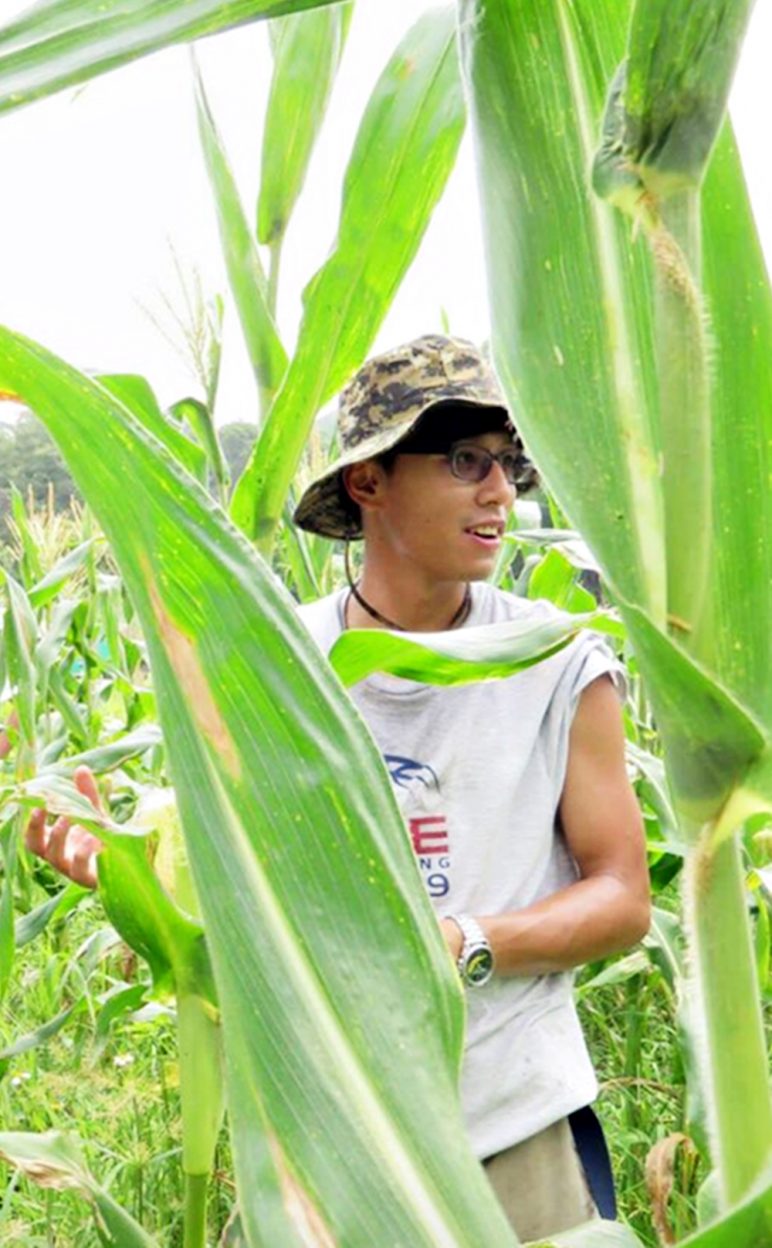 In Hong Kong, we would often hear someone tell a person to “Go back to farming at your ranch” to tease one’s lack of wit. Now people don’t need to farm at a ranch, nor are they foolish to be a farmer. We found a perfect example of that in Wu Ying Luen, Hand—a young, humorous, and radiating farmer—from the Society for Indigenous Learning (SoIL) in Hong Kong, who differs greatly from our traditional image of a farmer.

Hand did not grow up in a farming family, and he was just like any office young adults 4 years ago who would work in front of a computer every day from 9 to 6. He surprised everyone by switching to the farming profession while they were expecting him to stay on the “right” career path.

A dried corn that became the seed of life

Hand had been an Education and Promotion staff at CEDAR for 4 years, who was initially inspired in farming by our partners’ projects in Northern Thailand in 2009.

“There were a lot of families in the mountains in Northern Thailand that would hang a dried corn at their front door. I asked them why, and they said it was to remind them of something.” He discovered that there was a time where merchants would visit the villages and tell them to put all their resources into growing corns. Driven by the seemingly great profit, everyone in the village started to grow corns exclusively, not knowing that the merchants would not compensate them when the price of corns went down. They experienced huge loss at last, and hence they now hang a corn on their door to remind them to not be manipulated by greed again.

“A seed could destroy a village but it could also bring development,” said Hand, who was amazed by the power of seedlings and farming in general, and became genuinely enthusiastic about agriculture.

At that time the Garden Village incident was underway in Hong Kong [i.e. The demolition of an agricultural village for building railways], which provoked Hand to reflect on the relationships between the land, farming, and life. He concluded that even when people live in an urbanized Hong Kong, they would still need seedlings to support their lives and culture. He eventually joined the farming activities of the SoIL and learned much more about food and health. He said, “Our bodies are precious to us, and we would feel much safer to eat the things grown by people we know, hence farming also empowered us to be able to protect our friends and families.” He naturally became a full-time farmer 4 years ago when the SoIL was hiring.

Experiencing true freedom in the country side

Hand is now working and living in the facility of SoIL where he feels completely at home. His lifestyle has completely changed where he would utilize natural resources around him and drastically reduce his carbon footprint, such as using natural soap, cooking with firewood, packaging with banana leaves, salvaging from the dump station, keeping his activities within the nearby areas, collecting scrap vegetable and bean as fertilizers, etc.

Unlike working at the office, a farmer is completely at the mercy of the nature where things often do not work as planned. On top of the everchanging weather, the farmer must also deal with the condition of the land. “Working with the land is the most complicated thing ever,” said Hand, as the land condition could turn bad without a clear reason. For example, sometimes a lot of bugs would show up at the same time but disappear just as suddenly. Hand is often amazed by the mystery of God’s creation and learned to not only rely on his own strength in farming, but also to cooperate with the land.

The field experience in the farm gave Hand some new insights to a Bible verse often quoted by himself when he was still working at CEDAR, “Why didn’t the Bible say to ‘give riches to the poor,’ but instead to give them the good news in Luke 4:18? What is the difference between them?” Said Hand, who learned from his farming experience that the freedom for the poor, in fact, means more than financial freedom, where it also gives them autonomy. Hand thought that to escape from poverty is only to flow upwards in a still-oppressing social system, but to harvest and enjoy as much as a person can from the land in harmony with the weather, ecology, and the land condition, is as free and autonomous as he could get.

Hand told us that currently, the network is weak among the local farmers of Hong Kong. He wished to get to know more of them and to listen to their stories. He would also visit Japan again in 2018 to learn their technologies in growing rice. The topic of breeding is what spiked his interest the most—as the crops adapt and change to their environments, farmers could pick and breed from the harvest per the crop’s yield, taste, and look, and could eventually come up with a unique crop that is only fitted to its environment, “Breeding is the complete manifestation of the interaction between man and land, I think it is tons of fun.”

Hand’s employer, SoIL, has been longing to increase the number of full-time farmers, “The idea of ‘Half-Farmer, Half-X’ is not a new one in Japan, where it promotes a person to live a self-sustaining and healthy life from the farm while pursuing his dreams and giving to the society according to his own abilities and talents.” Hand thought this model could also work in Hong Kong.

The interview has changed my perspective to farmers as I was surprised by how tight the bond can get between man and the land. We have indeed begun to habitually control our nature and forgotten that every little piece within God’s creation serves a function that accommodates and survives off of each other, just as how orderly was the creation process in Genesis. As we get to know deeper and be amazed by His creation, we shall also humble ourselves and stop being blind to the picture He has painted for us.