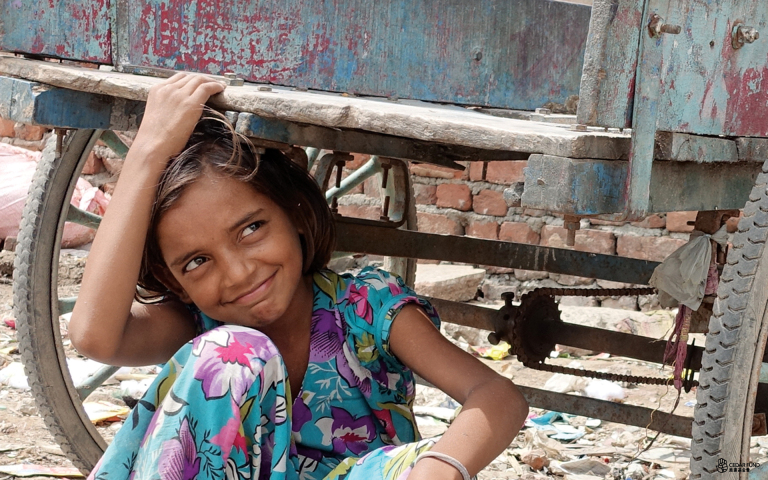 The rapid economic growth of India did not significantly reduce its population living in poverty. Although halved from the 90’s, the number of poor people living in India still reaches 600 million, with 300 to 400 million of them living under extreme poverty. The country is not spared from the plethora of social problems experienced by other developing countries, such as a large income gap and rural-urban migration. CEDAR hopes to share with you the stories that took place in the lesser known areas of India, and we wish you could remember the suffering people and God’s servants in your prayers in this New Year season.

Love among the needed

The Society for Promotion of Tribal Welfare and Development (SPTWD) is CEDAR’s partner in Delhi, India, who stood fast to demonstrate God’s love to the least and to change people’s lives throughout the years by slowly improving their living conditions in situations where change was seemingly impossible.

The story of SPTWD started with its founder, Sem Haokip. In the 90’s, a village named Manipur in eastern India was involved in a racial conflict that took 300 lives, including that of Sem’s sister. Consumed by vengeance, Sem could not eat and sleep well. At the same time, he realized that violence against violence could not solve the problem at its roots, while the understanding and acceptance of the other groups’ culture could. With that thought, he went back to the village where his enemies resided and started to build schools, and facilitated cross-cultural decisions making. His exhibition of love against hatred was greeted with success seen in the raise of cross-cultural acceptance and trust. Sem eventually founded SPTWD in 2003 that focused to serve the underprivileged in the suburbs.

Being the capital of India, New Delhi is not exempt from environmental and population crisis despite having significant advantages in reaping the fruits of development first hand, such as the Aadhaar card that greatly simplifies the social security registration process. It has its own problems such as rural-urban migration causing a large migrant worker population, as well as accelerating the city’s unemployment rate, pollution, human trafficking, crime rate, and urban poverty. Sem, the faithful servant of the slums.

Urban poverty is a hard and multi-faceted puzzle, but Sem proclaimed that “God’s redemptive transformation” is crucial to the people and communities they work with and work for. He hoped that the new generation and the women in the suburbs would restore their dignity in God through the works of SPTWD, whose focus in recent years has been to stimulate employment and to implement sustainable income in the target group by providing them the business loan support and grounds for social enterprises.

Building Bridges of Love for the Next Generation

SPTWD provides vocational trainings for young people and connects them with employers. Sem introduced us to a group of youngsters who came from northeastern India to Delhi, “Many of the NE youths who come to Delhi are from poor families. They are less educated, with no skill and work
experience, hence making them uncompetitive in the job market… They were furthermore marginalized because of their migrant status; oppressions and insults are common in their communities. They are also isolated from local churches. Many youth got into drugs due to depression and humiliation and exploitation suffered from their employers.” He and SPTWD were hence committed to be the bridge between these youngsters and churches that facilitates social support networks among them.

Young people living in poverty would often make ends meet by stealing on the busy streets of Delhi. “This is crucial to meet the aspirations of the urban youth living in slum colonies to prevent them from falling into crimes and other exploitations.” Said Sem, who partners with the local churches to provide vocational trainings for them, “They just couldn’t see how things would work. All they needed was just an opportunity, and that is exactly what we’re going to do, to be a lighthouse in the dark that gives them the spark of hope they deserve.”

Changing the lives of women

We were also being introduced to SPTWD’s work among women. They had two social enterprise projects, one of which was a textile school, and the other one a sanitary napkin factory that showed great financial promise that provided the participating women 60% more of the projected income in the last quarter of 2016. Sem is undoubtedly excited, but he further longs for the changes in the women’s lives. The sanitary napkin factory improved the income and
sustainability of women; at the same time, it promoted the use of clean sanitary napkins that replaces other unhygienic means of cleaning during women’s period.

He told us the story of Sarita, a typical Indian woman who was married at an early age. Unfortunately, her husband became an alcoholic with serious illnesses. She was forced to find a job to survive as requested by his mother and father-in-law. Sarita became a sewing teacher in our partners’ project in 2007, and came to know Christ and was baptized after 2 years by joining the daily morning prayer sessions with other staff. Unfortunately, life had not been kind to her as she was having a troubled marriage, and was eventually passed away from Leukemia in 2013. However, her kind smiles and positive energies had set a great example for the girls in the sewing class that encouraged them till this day.

Sem told us that Sarita was a perfect example of how the Lord would search for the sons and daughters chosen by Him, and when His followers are steadfast in their faith and servanthood, the people around them will see His glory in them, just like how He prepared a great teacher Sarita for the students of the project, who not only taught them skills, but also inspired them spiritually.

Christians amount to 3% of India’s total population. Being a minority religion, Christianity is being as oppressed and segregated as experienced by the underprivileged. The SPTWD’s service in India is plagued by the lack of human and physical resources, office space, and religious freedom, which has only been more and more restrictive lately. Despite these challenges, Sem is still diligent in upholding Christian values in everything he does, just as taught in the Colossians—“Whatever you do, work at it with all your heart, as working for the Lord.” This is also the motivation for SPTWD that propels them in sharing Jesus’ love to more people in the suburban in the face of the challenges.

We are thankful for the great testimony made by Sem and his team, who bring love into the city edges as God’s faithful servants. We also hope that we could devote ourselves to the Lord in this New Year and support the bruised reed and smoldering wick near and far, that we would promote justice with our faith and long for Christ’s sovereignty on earth with hope.