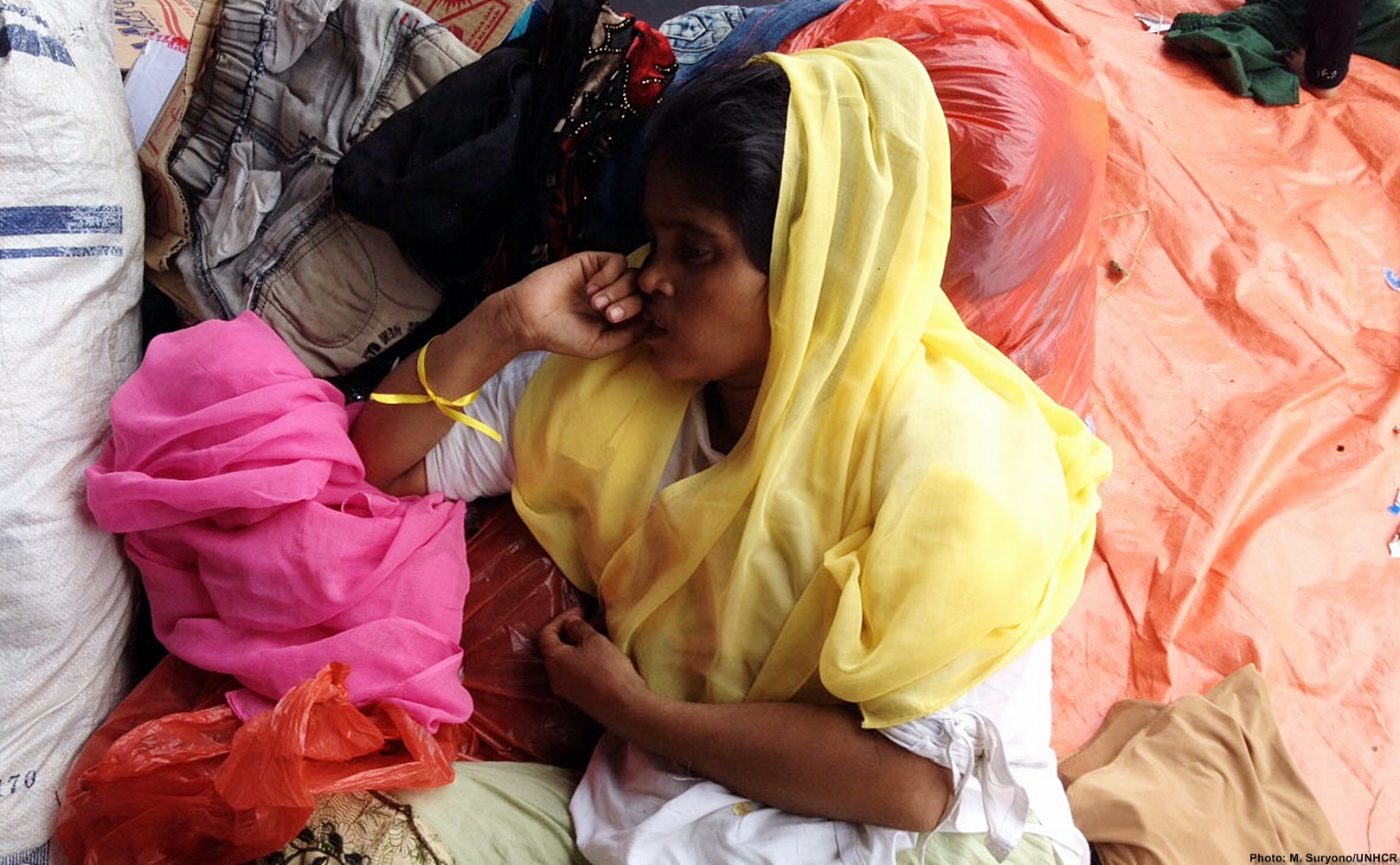 One of over 600 Rohingya refugees who arrived in Indonesia’s Aceh Province after being rescued by local fishermen on 15 May.

“The boat was very crowded,” a 29-year-old Rohingya migrant has just spent six months at sea, in an open boat crammed with 450 people. “It was hard to sleep or take exercise. Our legs were swollen; we were very weak. We prayed to Allah. We thought we would die at sea.”

An estimated 7,000 migrants, the majority of them Rohingya Muslims from Myanmar, have been adrift on the Andaman Sea and the Malacca Strait for over a week with dwindling supplies of food and water after being abandoned by their smugglers.

Following emergency talks held in the Malaysian capital, Kuala Lumpur on 20 May, Indonesia and Malaysia have agreed to provide humanitarian assistance and temporary refuge to the migrants. But they added that the offer was contingent on the international community providing financial assistance and resettling and repatriating the migrants within one year. They also called on other countries in the region to assist.

The Philippines, one of the few countries in the region that is a signatory to the UN Refugee Convention, indicated on 19 May that it would be willing to accept some of the statement migrants. “It was crammed with people… I was speechless and breaking down into tears when watching them screaming, waving hands and cloth.” Said by an Indonesian fisherman who spotted the migrants rescued on 20 May from an overcrowded trawler. “I could not have let them die, because they are also human beings, just like me.”

The need for a search-and-rescue operation took on even greater urgency as conditions in the Andaman Sea worsened.

So far, the government of Myanmar has refused to be drawn in to the crisis, despite growing pressure from other countries in the region to address the root causes of the exodus of Rohingya. Its officials did not attend the meeting in Malaysia on 20 May and have indicated they will not come to a regional gathering being organised by Thailand to discuss the issue on 29 May.

In 2012, violence between Buddhists and Muslims in Myanmar left 200 people dead and many Rohingya villages destroyed. Land and businesses were seized and about 140,000 Rohingya, denied citizenship under legislation passed in 1982 and widely resented in Myanmar, were corralled into squalid camps where curfews were imposed. Tens of thousands have since opted to take their chances with the smugglers. [IRIN(1), IRIN(2), BBC]

“For the Lord your God is God of gods and Lord of lords, the great God, mighty and awesome, who shows no partiality and accepts no bribes. He defends the cause of the fatherless and the widow, and loves the foreigner residing among you, giving them food and clothing. And you are to love those who are foreigners, for you yourselves were foreigners in Egypt.” (Deuteronomy 10: 17-19)

Prayer for the Rohingya mirgrants:

The Lord our God is the one we praise; He is our God, who performed for us those great and awesome wonders we saw with our own eyes.

The Lord our God is God of gods and Lord of lords, the great God, mighty and awesome, who shows no partiality and accepts no bribes.

May You love the Rohingya migrants and the foreigners residing among all nations, giving them food and clothing. May You defend the cause of the fatherless and the widow, and uphold the cause of the oppressed and give food to the hungry. May You be in charge of the mind of the leaders of all nations to save the lives of the Rohingya migrants and give them land to live. May You frustrate the ways of the wicked and the smugglers.

Lord our God reigns forever for all generations. Amen.