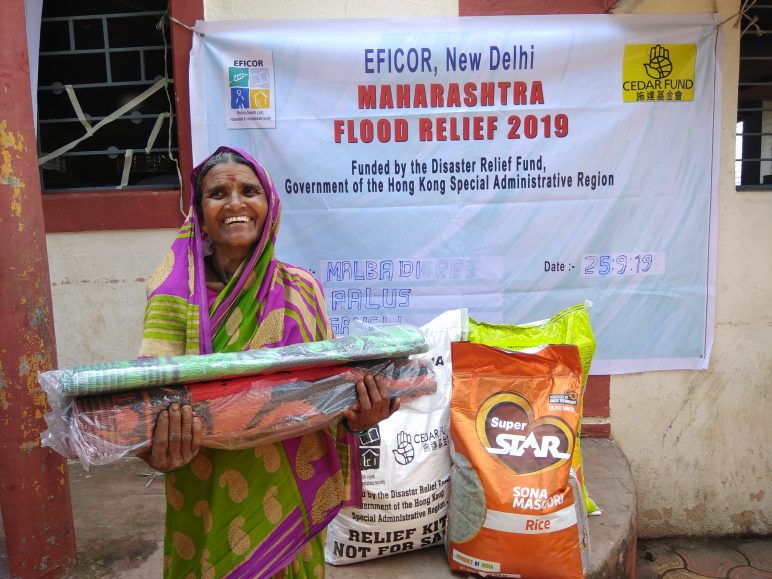 Since this July, India has been impacted by monsoon. This disaster was the most severe flood in recent 25 years. By the end of October, over 2,100 people died, 2.6 million people were inflicted and more than 400,000 houses were destroyed. [1] And Maharashtra, the major cane production area in India, was most severely impacted, where 22 districts were devastated, 430 people died, and over 700,000 residents were forced to seek shelter. [2]

After donating HK$195,000 to EFICOR, our Indian partner, to help 1,500 flood survivors in July, CEDAR Fund received a grant of HK$4.81 million from the Disaster Relief Fund of the Government of the Hong Kong Special Administrative Region in September to provide relief to flood survivors in Maharashtra. Gracefully, till 22 October, EFICOR had already distributed food, household and hygiene kits to 14,640 affected families in Maharashtra (please refer to the end of the article for the items list). Our Head of Programme Department Dr. Chan Pui Si also visited the place and listened to the stories of flood survivors.

One of the benefited families was Jagganath and her family, residing in Maharashtra’s poor region. Jagganath was a 55-year-old widow, whose son had left home and his wife and three children for work in the city. Their family income had already been insufficient for livelihood. Before the disaster, Jagganath had still worked in other people’s farms to earn a little for the family. When the flood came a few months ago, her village was flooded and the floodwater was once 10 feet deep. Jagganath fled with other villagers in emergency, that her home and assets were all lost.

On the day of relief aid distribution, Jagganath received rice, cooking oil, bed sheets, sleeping mats and etc. We would never forget the smile hanging on her face with the items in her arms.

We include some of the beneficiaries’ responses here to help us remember these devastated neighbours, and pray for their restoration. We also ask for prayer for India, a country always impacted by disasters, that the Government could establish better flood prevention measures and an early warning system for hazards.

Houses were destroyed by flood

An Indian flood survivor said, “since the flood, we don’t have any work in the village…The emergency aid provided by EFICOR, CEDAR Fund’s partner, could relieve our food shortage problem for one to two months.”

Another Indian flood survivor stated, “I am so happy to receive these items that I will never forget. These items could support us for a month.”

Items delivered to each family include: