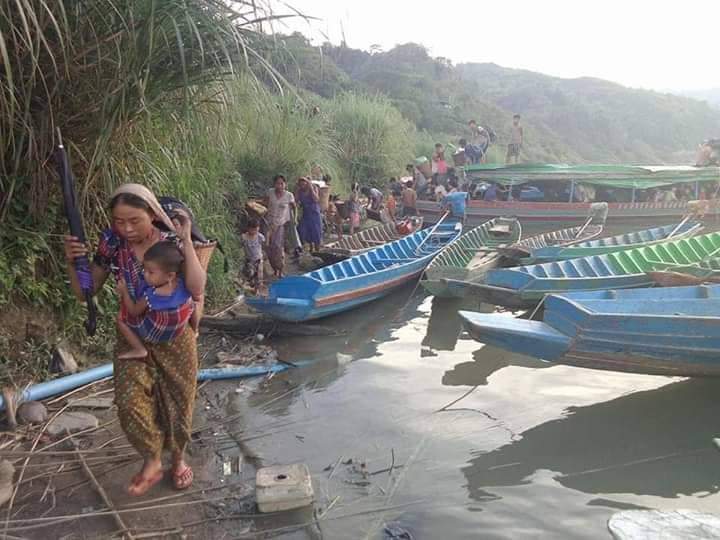 Noticing a vast group of displaced people, CEDAR and its partner Full Moon Children Development Ministry distributed food and blankets as aids to 520 families (2,100 people) who sought shelter in temporary tents of western Myanmar from February to April. Collaborating with us in this response was Pastor Aung Din, who was well-loved by the locals, well-respected by local government and his experienced team. Many times, the Aung Din’s team encountered various armed forces while visiting different locations. Thankfully, the armed forces would give way so as to let the team deliver our aids to the needy efficiently.

A family that we helped has 4 boys. The men of the house had either lost contact during an armed clashes or had been captured by the rebel forces to be its forced labours, leaving the grandmother Daw Naung and her daughter to take care of the children [2]. As the conflict continues, they can only take refuge in a makeshift tent where there is little space for the 6 of them. Despite the poor condition of the family, Daw Naung and her daughter have been very brave to live through the circumstance. They are glad that the 4 children are safe.

Daw Naung said emotionally: “We lost all men of the family within 2 months. My daughter’s husband was captured by the rebels and never returned. My son and his wife were lost with no trace of clue. Luckily, I can still stay with my only daughter and 4 grandchildren.”

Daw Naung has been praying for the restoration of peace in the region, and for her grandchildren to be able to go back to school. Their pressing concern before receiving any aid was food and water. As they were living in a remote area far away from town, she worried that the aid might not be able to reach that far. It was not until the day that a representative of the camp told her that rice and dried fishes would soon be sent to them that her worries were eased.

Daw Naung was very thankful to receive food aids. However, she knew that the monsoon season was fast-approaching and the conflict is still ongoing, it is still unknown to them when they can return to their home. CEDAR invites all supporters to keep praying for the displaced in Myanmar, to pray that our God will bring justice and peace to Myanmar that people shall live in a place with nothing to fear.

Please support us by donation: http://bit.ly/ecedar-donate

In 2017, CEDAR published a picture book (in Chinese) on the transformation of lives of conflict-affected children in Myanmar, you may order via http://cedarfund.org/picturebook/ (Chinese only). You are also welcomed to contact us directly and invite us to share at your church or organisation about the stories of the locals in Myanmar.

[2]: A human right organization in Chin State pointed out that people living in the south of Chin state village were forced to work for the armed forces. Please refer to http://www.aljazeera.com/news/2019/05/myanmar-military-committing-war-crimes-rakhine-amnesty-190528090400122.html