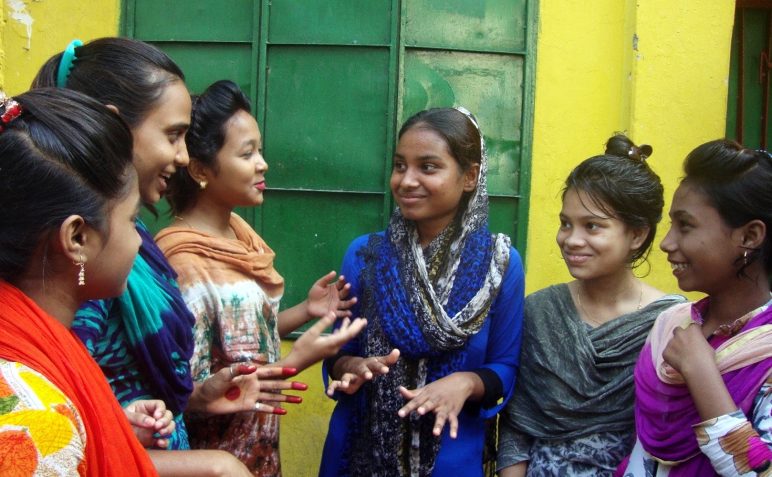 As a peer educator, Taslima (middle) often catch up with other girls in the community to learn about issues they are facing

Every individual has their rights despite their social status, age, gender, and education level. According to the United Nation’s Convention on the Rights of the Child, every child should have the rights to survive and thrive, to be protected, to participate and make their voices heard.

In Bangladesh, where 90% of its population are Muslims and 10% are Hindus, the caste system plays a significant part in the lives of Bangladeshis. People are categorised into different castes, and people who belong to the lowest social status group in the caste system are the Dalits, meaning “the oppressed”, or widely known as “the untouchable”. Dalits are often discriminated against by the society, and they can only do hideous work, such as collecting dead bodies, cleaning, and emptying trash bins. Poverty has forced many Dalit children to drop out of school to work or get married to share their families’ burden, violating their rights to survive and thrive, and rights to learn and to be protected.

In slum communities in Dhaka, CEDAR works with partner SATHI to educate Dalit children and youth about their rights and the importance of education by forming children groups and organising regular forums. In their groups and at the forums, children and youth discuss various issues, such as child abuses, school dropout, and early marriage; they learn to protect themselves and build strong support network. In addition, SATHI organises community groups and activities to promote child rights issues to parents, community leaders, and local policy makers, in order to raise community awareness and encourage stakeholders to establish policies to protect children and their rights.

In recent years, our partner trains committed youth group members to become Peer Educators as social agents to advocate for child rights. They also participate in People’s Institution (PI) meetings as a voice for the community’s children and youth.

Taslima is a Peer Educator, as well as a leader of a girl group. She is enthusiastic in educating her peers and parents about child rights issues. She almost dropped out of school and got married after she finished her junior school exam, because her parents could not afford her education. She was already a member of a youth group at that time, and she knew her rights to education, so she sought help from her group maters and a PI leader. The PI leader helped to arrange fund from the community’s Child Care Fund to support Taslima’s education, which eased the financial burden of her parents. Taslima continued her study and what happened has motivated Taslima to become a Peer Educator and group leader. She says: “I have dream to complete my education and get a good job, and have my own house where I will be able to teach others what I have learned.”

Our partner, SATHI, says they are grateful to see a significant decrease in school dropout rate. Girls are able to continue study and early marriages were prevented. Child abuse and child labour issues are being addressed in the community. CEDAR and partner aim to restore the rights, value, and dignity of Dalit children, empowering them to rewrite their future.