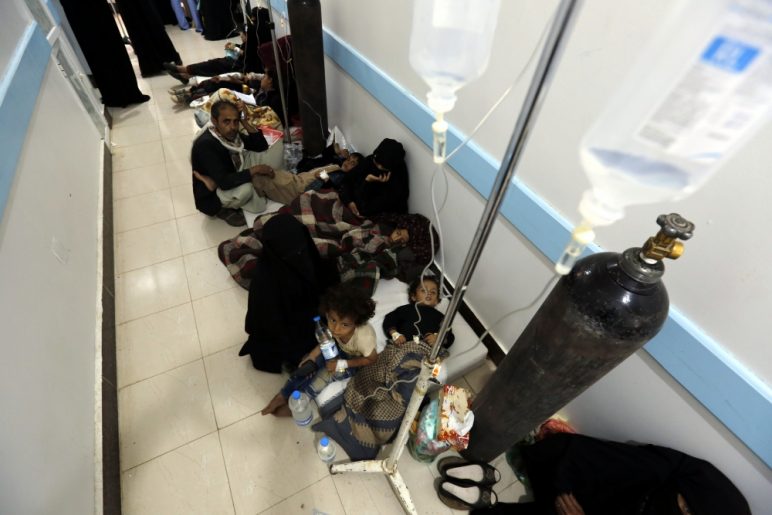 As cholera plagued Yemen, many receive treatment in the corridors of health facilities that are still operating amidst the conflict. (Photo: Mohammed Hamould/IRIN)

Yemen may not sound familiar to many Hongkongers, and it is rarely featured in the news. However, in the past three months, Yemen has been frequently mentioned in international news due to its widespread cholera epidemic.

The country has been ravaged by armed conflict in the last two years, and tens of thousands of civilians were killed. Yet, since May, cholera has been killing more people than bombs and bullets. There were about 124,000 suspected cases until mid-June; but as of early August, the number of cholera cases has increased to over 473,000.

Cholera is a preventable and curable disease. But the continuous conflict has caused significant damages to the local health care system, health facilities in 16 of the 22 governorates are functioning at less than half capacity. Without access to food and clean water, curable diseases become deadly.

In 2011, the Arab Spring movement spread across northern Africa and the Middle East, including Yemen. Political turmoil, economic devastation and civil unrest have put Yemen in a fragile and complicated state for six years. In March 2015, with the support of Saudi Arabia, the former president launched military actions towards the opposed power, and began the conflict.

The ongoing conflict has resulted in:

The United Nations’ strategy is to educate communities on proper hygiene practices and strengthen awareness of cholera prevention through various media channels and household visit. A medical expert said that vaccination could help control the spread of the disease, but it would be a challenge to carry out mass vaccination amidst armed violence.

“For the Mighty One has done great things for me—

holy is his name.

His mercy extends to those who fear him,

He has performed mighty deeds with his arm;

he has scattered those who are proud in their inmost thoughts.

He has brought down rulers from their thrones

but has lifted up the humble.

He has filled the hungry with good things

but has sent the rich away empty.

He has helped his servant Israel,

remembering to be merciful

to Abraham and his descendants forever,

just as he promised our ancestors.”

These verses are an excerpt of the Song of Mary. It is not only a song that praises and magnifies the Lord, but it is also Mary’s declaration of faith to God. Mary gave glory to God because He has done great things in her life; and, because she recognised God’s mercy, righteousness and faithfulness so she was willing to commit herself to serve God.

Today, God’s servants are still devoted in serving Him: some are at the frontline serving the needy in conflict and poverty contexts, some serve at the back to provide support, and some serve others by remembering them in prayers.

Let us all come together in our merciful and righteous God to pray for the desperate in Yemen: