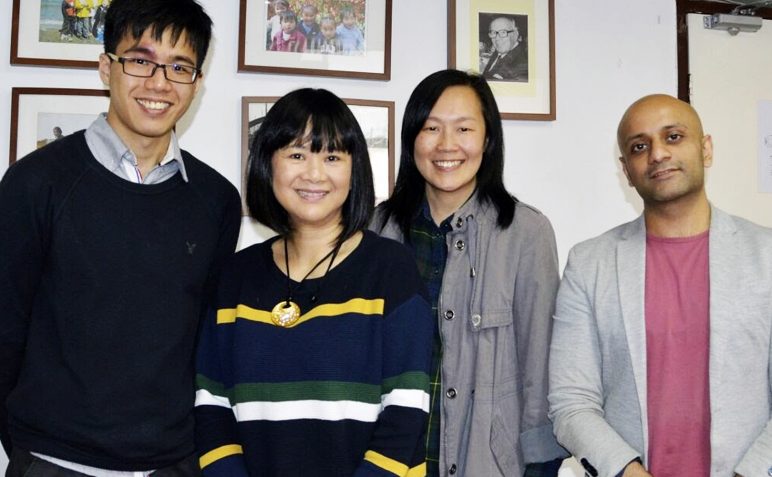 Refugees are often viewed as a group of aliens in foreign lands who would only appear on the international news occasionally. The vast majority of Hong Kong people hold the same views, thinking refugees do not concern their well-developed city; yet we forget that our society was built by refugees escaping from civil wars. The waves of Vietnamese refugees in 70s to 80s were also an integral part of Hong Kong’s history.

We visited the Christian Action (CA) to find out more about what Hong Kong Christians have done for the refugees over the years. Since the British Hong Kong government began to set up camps in Hong Kong for the Vietnamese refugees, God has raised a group of Christians to form the Hong Kong Christian Aid to Refugees (HKCAR), the former CA, which faithfully and quietly served the refugees for the twenty years that followed. We were honored to be able to interview the Executive Director of CA, Mrs. Cheung-Ang Siew Mei, and the Director of their Centre for Refugees, Justin Gaurav Murgai, about CA’s services to the refugees in the past and the challenges they are currently facing in helping them.

As war constantly produces the largest of refugee waves, the refugees coming from Vietnam were fleeing from the Post-Vietnam War communist government out of fear. British Hong Kong declared itself the port of first asylum on the basis of humanity. Hence, Hong Kong became the first stop for Vietnamese refugees where western countries would screen and accept those who are qualified, while the rest will be repatriated to Vietnam by the Hong Kong government.

The initial waves of refugees stayed at the two temporary camps at Kwun Tong and Sham Shui Po. We were shown by the staff of CA a sample of the triple bunk beds conserved from the camps. Those were in twin size, and each family unit was assigned to only one bed at that time. Few could imagine the living conditions and challenges they were facing.

After multiple advocacies for the refugees throughout the years, starting in 1981, the government finally relocated the refugees systematically to a camp located at Kai Tak, where organizations like HKCAR could better consolidate their resources and provide services like dental clinic, and schools provide basic education for the refugee children (The Gary Block building where the current CA office resides is a former school campus).

As the British Hong Kong government’s attention was shifted to a large number of new immigrants from mainland China and a number of societal problems, the work of settling over 100,000 Vietnamese refugees largely fell onto the shoulders of various NGOs. “Since the majority of Hong Kong citizens were not in touch with the status of the refugees, the HKCAR mainly got its support from the Rotary International and other foreign churches,” said Mrs. Cheung. Despite limited resources, HKCAR did not stop serving and working for the marginalized refugees by fulfilling their survival, health care, and basic education needs. They also focused on providing vocational trainings to the refugees who could work, in order to boost their income and provide labor force to the society. Most trainings were textile-related as Hong Kong’s retail industry expanded, and with factories moving slowly to China due to labour shortage during the 70’s and 80’s.  Later on, they have included barbering, small business, and computer training. These services not only provided better living conditions for the Vietnamese refugees, but also helping them to regain their dignity as human beings.

Going into the 90’s, the HKCAR began to expand its vocational trainings services, originally set up for Vietnamese refugees, to help more individuals including new arrivals and marginalized communities, who were mainly unemployed. The organization was renamed to Christian Action in 1994.

The last service project aimed towards Vietnamese refugees concluded in 1997, but CA’s passion in serving the sojourns made them rebooted their services in 2003 towards the refugees and asylum seekers in Hong Kong. There are currently over 10,000 Torture Claimant cases in Hong Kong, with an acceptance rate of only 1%—way less than other parts of the world. “Asylum seekers were not allowed to work, and could only live off of the least possible amount of government subsidies of around 3,000 HKD per month—quite an impossible situation,” said Justin, the Director of CA’s Centre for Refugees, reminding us of how luxurious our basic life styles might seem to them.

Hence, CA’s calling was to fill the gap. They established the Centre for Refugees in the Chungking Mansions, providing basic hot food, clothes, and daily essentials for refugees and asylum seekers; they gave refugee children education opportunities via subsidy programs; and they provided them consulting, counseling, mental health, medical referral, and legal consulting services.

When asked about where he found hope in this difficult front of service, Justin said, “They call this place (CFR) a ‘place of hope’, because this is where they find it.” He mentioned food support as one of the practical things CA did, where before 2013, the food given to refugees and asylum seekers were rationed from a set menu, which seldom fulfilled everyone’s need for food culturally and religiously; eventually, CA successfully advocated for the refugees and the government started distributing food stamps for them to purchase their own food in supermarkets instead. Something as simple as this arrangement, Justin believes, is a step towards allowing refugees to live with dignity.

Undoubtedly, teaching people to fish will always be the better way. Ideally those being given a Hong Kong citizenship (currently only a few hundred) could find a job and be self-sustainable. “The Vietnamese refugees were allowed to work, but today’s refugees weren’t, despite a much smaller population and the society’s lack of labor forces,” lamented Mrs. Cheung.

Being the bridge in society

CA currently spends most of its efforts in education and advocacy. “Victim blaming happens every day in our society, hence we shall solve the problem at its cause by educating the people about the refugee situation,” said Justin. Besides hosting workshops, they are actively training volunteers and interns to become advocacy ambassadors. On the other hand, they’re advocating for better policies towards refugees and asylum seekers in Hong Kong, and the education rights of their children. Justin said, “One of the most difficult tasks is to coordinate the efforts of different parties—you couldn’t just advocate in international churches while ignoring the local churches, nor could you only find help from the pro-democracy camp but not from the pan-establishment camp. The refugee problem is a societal situation that needs the intervention of everyone, and CA is hoping to be the bridge that brings the problems to meet the solutions.”

Lastly, Mrs. Cheung reminded us that Jesus was once a refugee living in Egypt, that being His disciples in Hong Kong means we have to follow His model in serving the minorities, “Jesus taught us to love our neighbors, and today the refugees are our neighbors. Nothing beats the kind gestures and open arms we give them when it comes to showing our love to them.” Are you willing to bless the refugees living next to you and give them warmth in this foreign land?