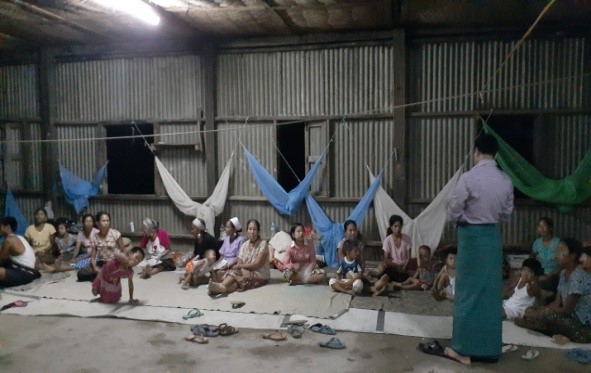 CEDAR Fund and our partner in Myanmar, Full Moon Children Development Family, began the first phase of relief work in the conflict-affected region in February 2019. Collaborating with us in relief distribution was a local team led by Pastor Aung Din, who had rich experience in relief work and had won the respect of the locals as well as the local government (details of first phase relief: http://eng.cedarfund.org/2019/07/11/myanmar-relief-report-eng/) Just recently, Aung Din told us that he witnessed confrontation between two parties in which the Arakan Army held three villages as strongholds, forcing people to flee immediately. As of now, these people have sought shelter in an abandoned government office building and urgently need emergency assistance.

Due to ongoing and increasing demand of the region, we decided to validate our second batch of funds (US$18,000 which is equivalent to about HK $140,000) in June this year to support the relief work carried out by our partner and the Aung Din’s team. 363 households (2,472 people in total), including 158 families who were staying inside the government office building, will be benefited from our second phase of relief.

International awareness of the region has grown since the Myanmar government’s oppression against the Rohingya community in Rakhine state in 2017, which has forced around 800,000 Rohingyas to flee from Myanmar to neighboring Bangladesh. Yet, the conflicts in western Myanmar are neglected by the public at large. Both conflicting parties have seriously violated human rights. Among them, the Myanmar military heavily bombed villages and executed extrajudicial murder, causing over 30,000 people fled from their homes.

We encourage all to keep praying for the Burmese of western Myanmar and consider supporting our second phase of relief by donation. If you donate online, please choose “Specific project”, and enter “Assistance to Refugees in Myanmar II”. Alternatively, you can Click Here to download the donation form. Please fill out the form attached with a cheque (Payable to CEDAR Fund) or bank-in slip (HSBC: 600-385678-001 / BEA: 015-185-68-00931-7 SSA) and mail them to “G.P.O Box 3212, Hong Kong”.

May the Lord use us to offer help to the needy!