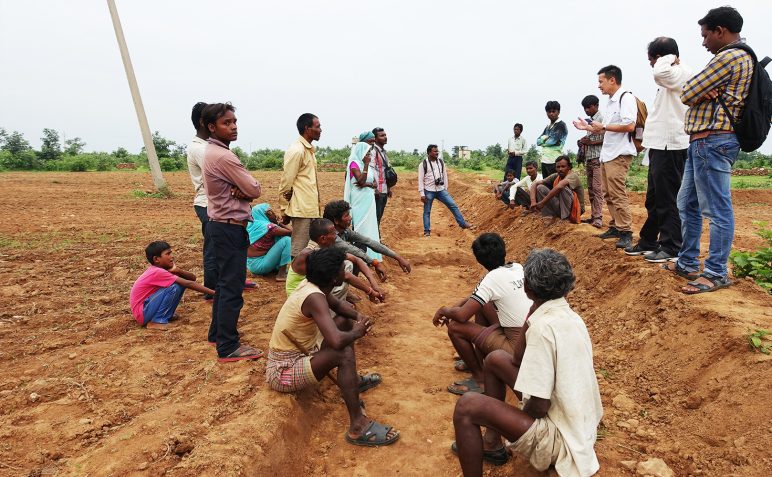 Written and edited by: Jojo Poon

“Previously, I have worked in Tung Chung, Sham Shui Po, and Yuen Long before.” Many of us know that Fountain is the “Bangladesh guy” or “Prince of Bangladesh” at our office, but little have heard of his story before CEDAR. He says he began in community work locally. From different times of his service, there has always been one unified goal – to look for God’s footprint wherever he goes.

When he was working in Tung Chung, Fountain was assisting community members on job employment as a social worker. Due to its long distance from business districts and to save on transportation fees, low-income residents in Tung Chung tended to look for jobs nearby, such as the airport and around Tung Chung. At that time, Tung Chung had many newly built schools, and school janitors were in need. Hence, the community centre designed vocational training for the local residents, many of them were later hired. From a programme perspective, it was a success; but deep-down in the heart of a beneficiary, he was not satisfied, “Why did I deserve to live like this?” Fountain realised that though they had successfully helped the locals to solve the job problem, they did not have the answers to their life’s struggles and injustice. From then on, he was more determined to connect development work with spiritual life.

Working alongside Fountain for some years, I admire his attitude in relying on God and his constant desire to seek God’s intervention in whatever he does, from visiting project sites to interacting with beneficiaries, and from communicating with frontline partners to monitoring project progress.

“We focus on serving people living in Interim Housing in Yuen Long. One unforgettable sight was when we went house visit, I saw a man playing “Aeroplane Chess” by himself, acting as four players. That moment, I saw isolation.” Fountain and his team’s work was to provide support to and connect members living in Interim Housing to face life challenges together. He shares an incident that their community centre and office were maliciously damaged with red paint all over and burned. The police believed the incident was related to land ownership issue, and it was an act to threaten their presence. Fear arise among the staff for their own safety.

The fire had burned and ruined most of the office, except one wooden plaque where a Bible verse was printed. This Sign calmed the hearts of the staff and restored their faith. After the incident, they organised prayer walks to pray for the community, and the office was later renovated. When the community centre reopened, they invited community members to do handprints on the wall where red paint was splashed over. They also hung a banner up indicating that everyone, including those who did the malicious act, were welcomed to come in. “That day, we invited government officials, as well as many community members, including the man who played ‘Aeroplane Chess’ by himself, to join the opening ceremony,” says Fountain.  He saw that the incident had brought the community together.

In 2012, Fountain joined CEDAR and was responsible of supporting and monitoring overseas development projects, specifically projects in South Asia and Africa. Although his role was to give support, to him, it offered great opportunity for him to learn from the people in South Asia and Africa what development is. “Solidarity is an instinctive sense found in men.” It sounds like an abstract concept, but as he continues sharing, we began to understand what it means, “The first time we went to Bangladesh, everything was very new to us. We asked a young man, he spent 15 minutes helping us to re-activate our SIM cards. Later, I learned that we were standing outside of an exam centre. He helped us but missed 15 minutes for his test. Another time, I was in Zimbabwe, visiting a lady who could not work due to her illness. Yet, she was able to raise 13 children, whose parents had passed away due to HIV, with the financial support of the community.” Fountain says that it was uplifting to see this natural consciousness of “caring for others needs before mine” in them. This sense is, unfortunately, rare in Hong Kong; but commonly embraced by community members in developing countries.

“How does development relate to missionary work?” This is a question we were often asked. Fountain says, “When Jesus encountered the Samaritan woman by the well (John 4:1-42), what was He doing? Was He trying to solve the racial issue between the Jews and the Samaritans? Or adultery issue? Was He challenging gender norms? Or the woman needed living water, so He was telling her about the gospel? I believe that He did not had an operational agenda, but, He was simply caring for the woman, about her circumstances. Jesus cared for the demon-possessed man in Decapolis, and addressed to some other needs in Galilee. Wherever Jesus goes, He lives there, learns about the community and what they need…In John 20, it says: As the Father has sent me, I am sending you. This is The Mission. How the Father has sent the Son to live among the poor, full of grace and truth (John 1:14). The Son also sends us, the Church, to live among them, bringing transformation. This is development.”

To Fountain, 2017 was a strange year for Hong Kong. While the stock market and estate market hit record high by year end, population in poverty has also exceeded previous record as well. We often neglected the poor unconsciously. They were not included in our economic systems, in our social structures, nor even in our churches. “If anyone, then, knows the good they ought to do and doesn’t do it, it is sin for them.” (James 4:17) Fountain encourages brothers and sisters to select two groups: one locally and one abroad to prayerfully and financially remember and support. “The kind of support that involves emotions, that you will feel heartbroken at times.”