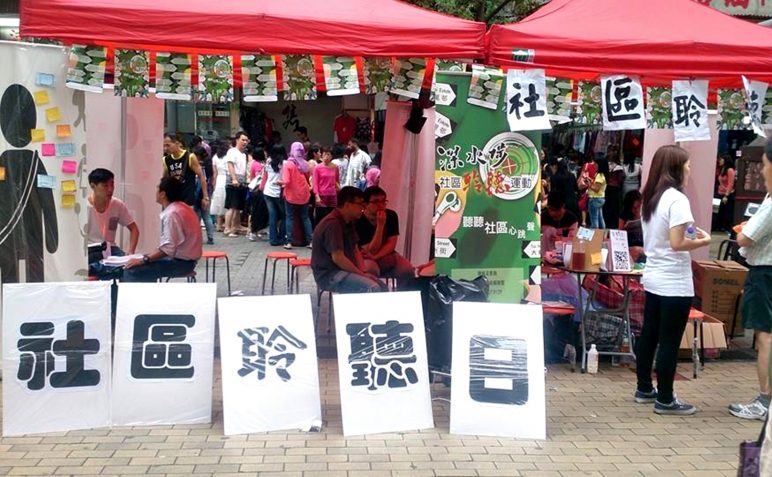 The Church’s role in Hong Kong’s social development dates back to early missionary times. However, in recent years, churches in Hong Kong were often accused of being absent from major social discussions, except issues that spiked its interest. For this issue’s “TAKING ACTION” section, we interviewed the Organiser of the social organisation, HK Citizens, Daniel Man, and asked him how they mobilise churches to respond to current issues through Community Organising.

The Beginning: Non-profit Work in England

HK Citizens oragnises community to work together for common good, which involves mobilising churches to bond with their communities. And this is not something new to Daniel.

Daniel started off as a social worker in Hong Kong; in 2010, he and his wife, Joy, had a chance to participate in Community Organising work in the UK. In one occasion, he experienced how people of different religions, such as Catholics, Christians, and Muslims, could cooperate with each other in an event. Similar events in Hong Kong usually involved religious leaders but not common believers. There were also little opportunities for people of different race, background, and age to interact. That experience got him thinking if Hong Kong could become a true multi-cultural society that embrace diversity.

After they returned to Hong Kong, Daniel and Joy wanted to bring different groups together to serve the community under the concept of cross-sector cooperation, hence, HK Citizens was born. Daniel was fully aware that it takes time for his dreams to come true, but he was never discouraged, “I wish to bring forth the idea of common good among people that we can all work towards a better society together despite our differences.”

Reflection: Going into the World

Daniel has been a Christian since secondary school. Even though he still believed in God in his university years, he slowly distanced himself from the church, as he felt that the church failed to connect with the society. Then, after he returned from the UK, he realised that criticising the shortcomings of the church would make little difference, so he decided to use his identity as both a social worker and a Christian to mobilise churches through his current work. But he admitted that this is a difficult task.

“We wish that the Church would not just limit itself to benevolent work,” said Daniel, who expressed that many churches participate in social services, but lack knowledge about their surrounding communities, hindering them to address the core of social problems. Community Listening is HK Citizens’ main approach to help make community members’ voices be heard, so everyone can learn about social problems the community is facing, and identify causes of the problems, then work out solutions.

Back to the Basics: Unity in Church

HK Citizens not only aims to connect churches with their communities, but also encouraging closer relationship among church members.

The Church has long been criticised for its exclusiveness, but Daniel had a different view, the Church need to first unite its members – every staff and member should listen and get to know each other. He shared a case that a pastor hosted a listening session after the church’s Sunday service to gather feedback. Brothers and sisters liked the novel idea since it provided a platform for them to hear from others and enjoy cross-fellowship interactions. “After the session, a sister said it was her first time to hear from an elderly, whom she sees every Sunday, to share about how he spends his day by just sitting on a bench at the park. Even though she saw him weekly, she never knew anything about him.”

Daniel said that the interactions between church members are often administrative and superficial, where brothers and sisters may not know the real needs of each other. He hoped that HK Citizen’s events can encourage Christians to listen and care for each other in church, equipping them to eventually serve their communities.

The Future: A Democratic Life

Daniel readily admitted that mobilising community and churches is a difficult process that calls for observations and trying different approaches when searching for a breakthrough. He hoped to change how we normally react to new problems by collaborating with different groups and soliciting the help of locals for social engagements. “Individual involvement is important, but the power to change comes from collective actions,” said Daniel, determined in increasing the level of social engagement within systems.

As for the Church, Daniel stated the example of their guided tour* in Shek Kip Mei, which they wanted to help participants to learn how the Church had serve the community in the past and know that they can do the same today. Daniel believes that democracy is not just about politics and elections, but it is a lifestyle. He urged the Church to reflect on what democracy and social engagement mean, and motivate believers to start caring for and engaging in their communities, helping them to identify the root causes of social problems.

It is never easy to learn to listen. Daniel’s work at HK Citizens showed us the importance of interpersonal connections, which we often miss the chance to listen to the voices of others in our church, community, family, or workplace. May we humble ourselves and start connecting with those around us through genuine conversations.

*Shek Kip Mei Guided Historical Tour
Lau Shiu Hang, a social work intern of HK Citizens, hosted guided historical tours in Shek Kip Mei in June and July this year to help participants to see the picture of a civil society that was composed of social organisations, churches, community groups, and locals, and reflect with them how believers, citizens, and the Church could engage in their community today.