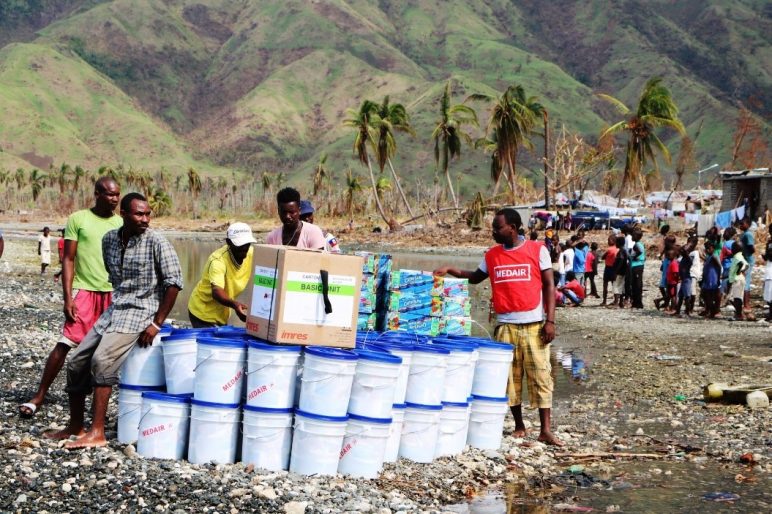 Ever since Haiti experienced the hurricane in October last year, CEDAR has partnered with the fellow members of the Integral Alliance (IA) including Food for the Hungry, Medair, MTI, and World Concern Haiti, and supported their humanitarian efforts in getting the disaster-stricken Haitians back on track.

The IA has reached 9 highly damaged regions in southwest Haiti in the first 3 months since the hurricane hit, providing temporary shelter, food, water and sanitation, and health services to the 3,150 victimized families (a total of 15,750 individuals).

Unfortunately, the relief efforts were far from enough to the victims who struggle to live the days ahead. For example, the hurricane had blown off the roof of the house owned by Anel and his wife, Islande. They were saved but they have lost all their properties. “We used to grow coconuts, bananas, where we would store half of them and sell the other half; but now the whole farm is ruined,” said the couple who anxiously waited to replant the crops after the flood subsides, since the harvesting of the new crops would not happen in a short time, “Our children have lost all of their school supplies and texts, and we have no idea how to pay for their tuition now.” Islande was more worried about her children’s health, which she was thankful to the IA for as they were given the emergency food packets.

We are tremendously grateful for the prayers and donations given to CEDAR and members of IA by the churches and Christians in Hong Kong for the disaster relief efforts in Haiti. There is a huge amount of families that are in imminent need of our help just like the one of Anel and Islande. Let us continue to pray for them: