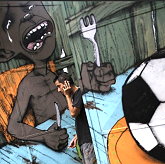 Corruption is a huge barrier to ending extreme world poverty. EXPOSED is a global campaign who wishes to a light on corruption and to highlight good examples. As the International Day for the Eradication of Poverty is annually observed on 17 October, CEDAR is calling churches and Christians to join EXPOSED, making appeals to the church, business and governments to operate with integrity.

Hong Kong churches and Christians are recommended to:

Pray for justice and integrity worldwide: