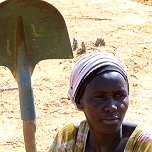 Niger, Maradai region, November 2011 Prices at Niger’s food markets are spiking in the aftermath of a patchy harvest, causing concern among food security experts that many could soon go hungry. “The unusually high food prices are affecting vulnerable people who are facing growing difficulties to feed themselves and their children,” said WFP Niger Country Director Denise Brown. “I am extremely worried about the food situation deteriorating in the coming months. We cannot sit back and wait for the worst to come,” she said. Niger is currently in the immediate post-harvest period, a time when the price for staples like millet ought to be coming down. Instead the failed harvest, brought on by drought, has driven them up. According to the Government of Niger, some 750,000 people across the country are severely insecure, a number expected to reach one million by early 2012 as the country moves towards its traditional lean season in March and April. In response to the looming food crisis, WFP is aiming to support some 3.3 million people over the coming year with life-saving food assistance.
Female worker in the Dan Kada Aguie food and cash for work site. Photo: WFP/Phil Behan