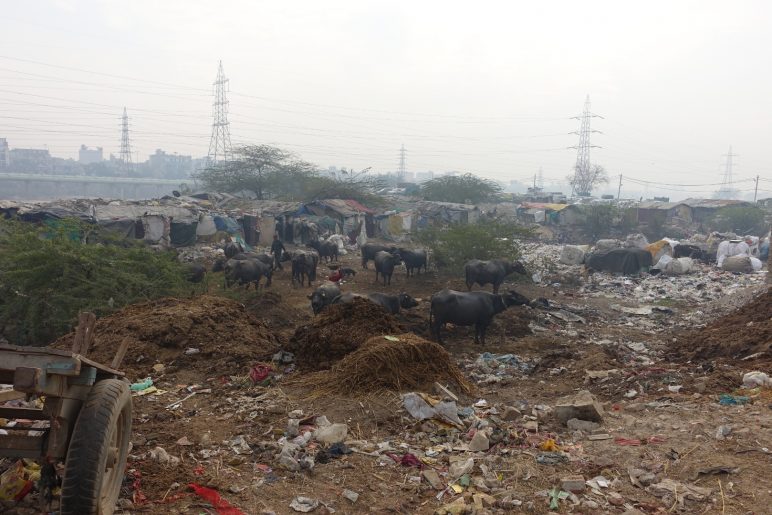 Usmanpur is a small town on the outskirts of the capital of India. The perpetual smell of damp cow dung, buzzing flies, and patches of murky water are a common sight of Usmanpur, the town seems to be the pictorial definition of dirty itself.

Almost all of the residents in Usmanpur are Dalit (a low caste social group) migrant workers who are employed by landowners to feed cows and milk them, or to sort trash.

Cow owners would have the workers herd the cows on the streets and let them excrete freely. Cowpat covered the only major road and every pedestrian paths in town, turning it into a paradise for flies. The poor hygiene condition affects children the most who would often experience diarrhoea. While the migrant workers could barely endure the situation, the landowners rarely lose any sleep over it as the Dalits are inherently filthy to them.

CEDAR supports partner, Society for Promotion of Tribal Welfare and Development (SPTWD), who saw the problem in Usmanpur and has been actively responding to the community’s need.

The Dalits [1] were used to accepting their fate, but some of them started to realise that pursuing changes for their lives is part of their rights. Under the assistance of SPTWD, they became community leaders. Working with SPTWD, the community has made some progress: community leaders set up meetings with local stakeholders, children held up signs to express their needs, and members of savings group had mutual support. As a result, some landowners were willing to restrain their cows from roaming about the streets, while others remained unconcerned. The migrant workers learned that while change is possible, it often takes some time to achieve.

Besides improving public hygiene, SPTWD also noticed needs of the women and started teaching them to produce menstrual pads in recent years. Thanks to the good quality and affordable price of their products and SPTWD’s education on personal hygiene, 547 women out of 1,000 they reached in the past 6 months switched from using cloth scraps into using pads. In fact, using cloth scraps was a viable way as long as they were washed after each use, but clean water was hard to come by in Usmanpur, women would easily became infected by reusing washed cloth scraps. Hence, the act of using pads was also an act of self-love for them.

On the other hand, are lower caste Indians intrinsically “unclean”? Or if this is just a label imposed by Hindu beliefs? How hard it is to break the obstinate idea! SPTWD hopes to change the mindset of the next generation and erase such label. By teaching the Bible and having pastors make regular visits to children’s families, they help children learn that each one of us are created in the image of God. Meanwhile, we are thankful that the Dalit community leaders have taken revolutionary steps in starting conversations about public health with others outside their caste, fighting for their voices to be heard.

…I saw water coming out from under the threshold of the temple toward the east… the water had risen and was deep enough to swim in… Fruit trees of all kinds will grow on both banks of the river. Their leaves will not wither, nor will their fruit fail. Every month they will bear fruit, because the water from the sanctuary flows to them. Their fruit will serve for food and their leaves for healing. (Ezekiel 47:1, 5,9, 12)

Then the angel showed me the river of the water of life, as clear as crystal, flowing from the throne of God and of the Lamb, down the middle of the great street of the city. On each side of the river stood the tree of life, bearing twelve crops of fruit, yielding its fruit every month. And the leaves of the tree are for the healing of the nations. No longer will there be any curse… (Revelation 22:1-3)

Many religions have a definition of what people, things, or activities make their believers “unclean”. Yet we see in the Bible, from prophetic times to Revelation, that there was a transitioned from identifying what was unclean to us being transformed by the Lord as holy, and how we could extend the Lord’s holiness to others like a flowing river. We could be the medium of His healing, and curses rooted in any communities could be expelled.