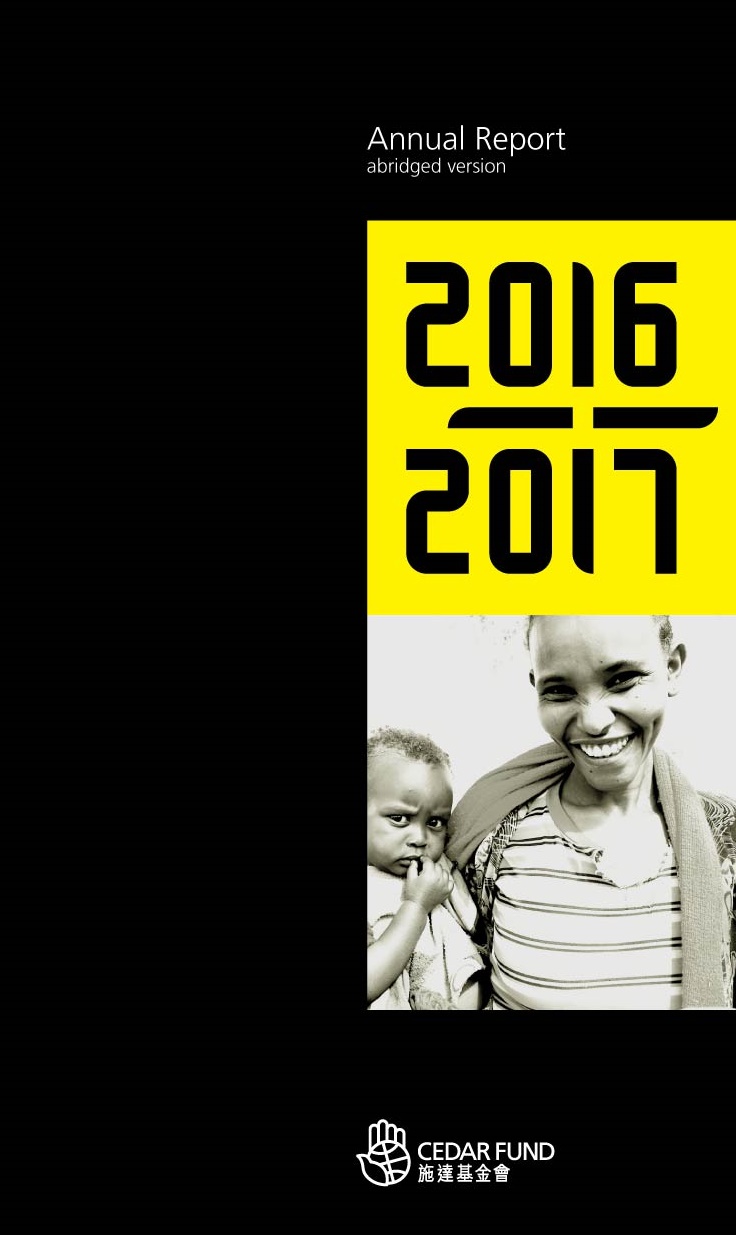 We’re Thankful for God and You

We give thanks to God for leading us through 2016 and 2017. CEDAR was able to walk alongside the poor and restore their dignity and value through 86 relief and development projects in partnership with 64 Christian organisations and churches in 15 countries around the world.

Our heartfelt gratitude goes to every individuals, brothers and sisters, and churches for your generous donations that we have received HK$16,001,695 this year.

We have reached over 8,000 believers and students by organising 46 educational events, trips and Barefoot Walk to promote the concept of Integral Mission, aiming to build a just and compassionate world together in Christ.

Partner implemented Disaster Risk Reduction (DRR) and disaster management work in flood-prone communities by establishing Disaster Management Committees in villages to monitor disaster prevention effort and helping impoverished families to raised their houses on plinths to protect them from floods.

China (Yunnan): From Bitterness to Sweetness

Drugs and HIV are prevelant in the border areas of Yunnan which the next generation are also affected. When this father learned that his daughter and grandson were diagnoised with HIV positive, he was furious and fell into utter despair. After a local church offer care and support, the father’s heart was touched. He transformed his previous hatred into blessings to others, encouraging his neighbours and others who shared similar experiences. CEDAR belives that community education and empowerment are effective in changing traditional practices. The photo shows a group of Ethiopian mothers who are fighting against FGM together. They meet every Saturday morning and discuss how to protect their children from FGM and other harmful traditions and to spread the messages to others. We supported our partner to establish a community centre in a marginalised slum community in Yangon. The centre serves children of migrant workers by providing after school tutorial sessions, forming youth groups, and educating them about issues such as HIV and human trafficking.

We witnessed how the women self-help groups helped its members to break the chain of domestic violence. Today, the groups have become a strong network to serve the community, such as giving solar-powered lights to poor and single-parent families, organising goat rearing training, and raising awareness of anti-human trafficking initiatives.

In recent years, extreme weather in Zimbabwe – constant drought and heavy rainfall – have significantly affected local farmers, such as Jasi. For years, Jasi was not able to yield good crops hence he was not able to feed his family. But this year, he applied improved methods learned from partner’s organic farming training and he reaped a good harvest despite of extreme weather conditions.

As CEDAR celebrated its 25th birthday in July 2016, we were duly reminded of God’s blessings and your support over the past quarter century. Without Him and you, we might not be able to make this far. Despite multiple challenges in 2016/2017 faced by many similar organisations out there, we still see clear traces of grace in each and every month of the past year.

In terms of poverty alleviation and community development, we have expanded our work in eight target regions by implementing 11 new projects, and sucessfully transitioned 2 emergency relief projects into long-term development projects. Although we have the least resources among 23 member organisations of the Integral Alliance network, we were one of the two members who had responded to every disaster relieve project in the past year. This was beyond our planning and could only be achieved through God’s provision.

To better utilise resources given by God, in early 2017, we began to explore long-term development plans in two focus countries, China and Myanmar. Our strategy plan for Myanmar has been reviewed by the board in September, and discussions for China will begin in December.

We’ve also launched our 5-year strategic plan in September, with the aim to build a solid foundation to live out God’s kingdom through our ministry. The plan will go through several stages, an important one of which is to improve our project management in 2017/2018. This will help improve the performance of our projects, as well as enabling us to expand our work.

“In their hearts humans plan their course, but the Lord establishes their steps.” (Proverbs 16:9)

While we plan and work to the best of our capacity, we should constantly remind ourselves to be submissive to God’s directions. Hence, we invite you to continue your prayers for us in our search for heavenly wisdom, while rejoicing with us in the grace we’ve experienced!